Hillary Ekeh has been re-elected as Imo APC party chairman in the just concluded APC state congress in Imo.

But Governor Rochas Okorocha described the election as illegal claiming that there was a court injunction restraining the party from conducting the election.

Mr Okorocha’s chief press secretary, Sam Onwuemeodo, on Saturday issued a statement that the governor had obtained an injunction from an Owerri high court to stop the congress.

The party chairman, Hillary Ekeh, countered the claim by saying neither he nor any member of the executive was served the injunction notice.

But the Imo police command claimed an injunction notice was served them and appealed that the congress be put on hold.

Andrew Enwerem, Police Public Relations Officer (PPRO), who disclosed this added that police will not allow any illegal gathering in the state.

Speaking to the News Agency of Nigeria (NAN) after the election, Ifeanyi Araraume described the congress election as peaceful and well-coordinated.

He said there was no fracas or any form of violence during the process and commended the party chairman for his re-election.

He also lauded party delegates who in their wisdom decided to retain Ekeh as their chairman.

Asked if he has any idea of the injunction notice, Mr Araraume said there was nothing like injunction stopping the conduct of the election.

“We the party stakeholders have no idea of any injunction, but even if there is an injunction nobody had been served so our election has to move on,” he said.

Hope Uzodinma in a telephone interview told NAN that there was no hitch during the conduct of the election, adding that the congress in Imo indicated that democracy is growing in Imo.

Deputy Governor Eze Madumere said the state congress was held successfully and the mandate of the people has been protected.

But the Deputy Chief of Staff to Mr Okorocha, Kingsley Uju, insisted that a faction of the party went into an unknown place to hold state congress even when a court injunction was served against the conduct of the election. 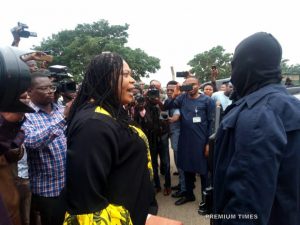