This applause came on the heels of world indigenous day celebration, which took place on Thursday in Abuja, August 9, 2018. 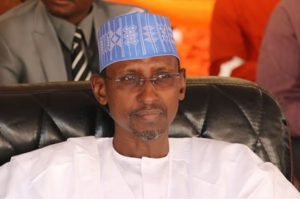 Speaking on behalf of the  Abuja Indigenous Association, their Co-coordinator, Alhaji Usman Shuaibu declared, “We want to thank the Minister of FCT for carrying the indigenous people of Abuja along in the affairs of the Territory. Since the inception of Abuja, no Administration had really carried our people along like the present Administration. In fact, we have never had so good like this before”.

Malam Shuaibu also praised the minister for ensuring that infrastructures and other social amenities get to the rural communities and satellite towns of the FCT.

He said: “Let me also thank the minister for providing infrastructures and social amenities in the interior communities of the FCT.The minister has done his best to ensure that dividends of democracy reach people at the grassroots. This is a feat to be commended”.

The leader of the group further used the occasion to appeal to the minister to use his good office to inform President Muhammadu Buhari to consider an indigene of FCT for ministerial appointment.

In her remarks at the occasion, Mrs. Nancy Bulus, who is the President of the National Council for Women Societies, FCT extolled the record of the current FCT Administration towards ensuing an inclusive government. He urged the Administration to support the emergence of women as candidates in the forthcoming general elections.

The Permanent Secretary further used the occasion to disclose that soon, the Administration would send some of the indigenes abroad for training on railway engineering and administration.

According to Sir Ohaa,the Buhari led Administration, in demonstration of its commitments to running an inclusive Administration,  has given the original inhabitants of FCT prime positions, including the position of a Permanent Secretary.

He assured the group that the current FCT Administration would continue to address issues that affect them in line with the law of the land.

Dwelling on the achievement of the present FCT Administration, the Permanent Secretary reeled out Greater Abuja Water project, near completion of Apo Karshi road, completion of Airport road, completion of hitherto other abandoned projects, opening up of more districts, cleanliness of the city, prompt payment of staff salaries, among others.